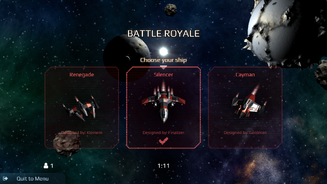 Upon first joining a Battle Royale match, the player will be greeted by a ship selection screen and the choice between three ships from five (previously 3) different shipwrites. The moment the server is first started a timer will be set for two minutes. Players can join, leave, and change their ship selection freely during this period. Once the timer reaches 0:00, they connected players will spawn in with their selected ship at a random place on the map, much like in Survival or Deathmatch mode. If a ship has not been selected, the player will spawn in with a randomly assigned ship. The Battle Royale arena is solely pvp, with all names and colors being hidden to prevent teaming. Unlike in every other game mode, neither weapon energy nor shields will regenerate over time. The only method to recharge these stats is to pick up energy and shield canisters, which will fully change the player's energy and shields respectively. These canisters, along with a random assortment of consumable secondary weapons will spawn in randomly around designated locations around the map. These are marked by a light yellow patch on the radar. Each player will only have one life, and is expected to seek out and kill the remaining players.

To prevent an endless game where ships are constantly fleeing or avoiding combat, a repulsive gravity field will be generated that acts in the same manner as those found in a Survival match. After PLACE_HOLDER time has elapsed in the match, the gravity field will be generated on the sun and will eventually expand and push all the remaining players in the map into a small area to encourage combat. Whether the repulsive gravity field has been spawned or not, the match will end if there are fewer than two players remaining. If there is a single survivor the match will end and declare that player the victor.

It is never useful to get mines. Just don't.

Just get a full load of missles and hide.

Get lots of mines and camp near the center. Made unplayable by the change making mines decay.