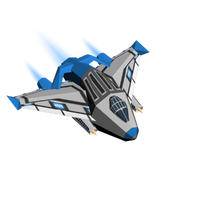 The Crusader, for much of its history, was know as one of the most under-powered ships in the game, though in spite of recent updates it has been made into a fairly formidable ship. The Crusader is an all around decent ship with a moderate amount of agility. As is the case with most ships, upgrading energy and shield regeneration first is generally the best approach, whether planning on attacking or defending. Because of its large size and relatively high mass, the player will generally fare well in combat as long as the opponent is constantly being rammed. While this ship is relatively competent when fighting, it still makes for a prime target with an enormous ship model. Unless the Crusader is able to ram the opponent against an asteroid, it will usually lose in a 1v1 duel. Though it still wont fair to well against most ships on level 4, it can kill lower levels relativity well.