Destroy the Mothership is a mod created by Kirto and 45rfew. There are two teams; Solarium and Lunatic, each with 7 different ships to choose from; however, players cannot select their team. Each team also features a Mothership, with extremely powerful shields, high firepower, and special abilities, but moves slowly and has low agility. As the title suggests, the goal of the mode is to kill the enemy team's Mothership. Whichever team loses their Mothership first loses. Each player's ship will have the same amount of gems. Upon losing gems, they will simply disappear without dropping into crystals.
Each team has a base from which they respawn, and are immune to damage inside. If a player enters an enemy base, they begin to take damage until they either leave or die. Torpedoes and Heavy Mines also spawn in the base. Motherships do not gain invincibility inside their own base, but they die rapidly inside enemy ones. Therefore the optimal strategy is to camp in base (boring stalemate if both motherships do this, easy win if enemy mothership goes to your base) or try to push enemy motherships into your base (with Hyperspeed). Behind the bases is a line of deadly barriers that kill any non-mothership ship instantly.

Next to shields and energy displays, two icons show the remaining health of the Motherships. Blue represents Lunatic and orange represents Solarium. If a Mothership leaves, another player on the team will receive it. However, if the enemy team has no one to serve as the Mothership or there no players left, the game will end and the other team will be considered the winner. The match will also end if either team wins. Players are rewarded with 2000 points when they kill someone.

The mothership is the key factor in this mod and should be defended at all costs. It is a hypothetical tier 8 ship, which can hold a whopping 300,000 shields and has massive firepower from the front and sides, albeit without engine protection. It also has 5 special abilities that can be activated after a certain amount of time. 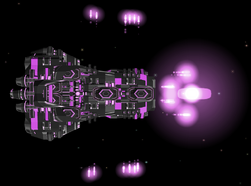 Missile Swarm Gives the mothership a maximum of 16 missiles to fire within a 4-second timeframe. "Allows player to spam out 4 missiles per second, for 4 seconds." - in-game description

Burst Heal Heals all friendly players within a certain radius by 10,000 shields. "Drops a healing pod that heals all players in the same team within a certain distance for 10k shield." - in-game description

Overdrive Increases the mothership's damage at the cost of shields. Lasts for 5 seconds. "Increases player's damage output by an insane amount. However the player will take damage. 5 second duration." in-game description

All abilities have a 2-minute cooldown after use. The mothership has a special icon that can be seen onscreen. The square represents what faction it belongs to; orange for Solarium and blue for Lunatic. 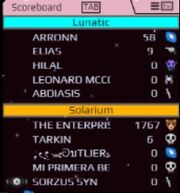 The leaderboard will display the top 5 players on each team, along with their score and a special icon for the ship they use.

These same ship icons will show up on the ship selection menu, which can be accessed in the base through a button.