Sometimes, returning back to home base is just not reasonable. Sometimes, you need to have the hangar teleported to your position, so that you can switch/tune your ship here and now.

Teleporting an entire hangar is stupid. Really. But it is possible to teleport ships, or even their pieces, if said pieces are properly designed.

And that's what Hotswap Fighter is all about.

The Core is a fragile-yet-agile fighter of low DPS, featuring two rapid-ish medium-recoil weapons. It is built to run away and survive, not to fight.

And most importantly, it is built to dock with HF-Dockables. So far, 2 Dockables are available:

Heavy Pulse is a nice little heavy fighter, featuring, you guessed it, a heavy pulse. It has a reasonable amount of ships and decent DPS and agility.

Light Pulse is the opposite. It doesn't really address the fragile-yet-agile situation of the Core, but it does provide additional DPS and a nice, large pulse weapon to play with. Oh, and two GIANT, as big as the Core, engines, for exceptional acceleration.

Upon being critically deshielded, HF doesn't teleport out of the battle; instead, the disposable(they're really cheap) Dockable channels some of it's remaining energy into an electronics-disrupting burst, and the other some into Core's shields. The latter quickly undocks and boosts out of the hussle, just to come back attached to a new Dockable. 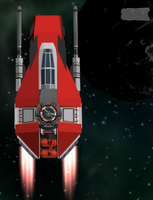 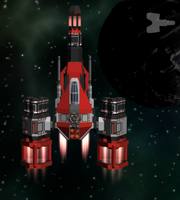 Hotswap Fighter - Bomber DockableBomber Dockable - science proved a long time ago that bullet speed is overrated. This dockable is designed according to that. 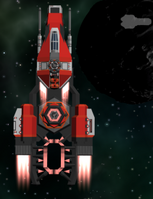 Hotswap Fighter - Sniper Dockable Sniper Dockable - Hotswap was originally designed with close-range combat in mind, but it quickly became clear that there is demand for a LRA outfit. 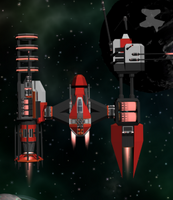 Hotswap Fighter - Rammer Dockable Rammer Dockable - where we're going, we don't need guns. All we need is a rigid shell, a high-tech collision dampening system, and an impulse engine.