Difference between revisions of "Odyssey"

Odyssey is a Tier 7 ship in Starblast.io. It has the second highest shield capacity and the second lowest ship speed in the game, both after the Aries. It fires one gigantic frontal pulse that is extremely slow and does immense damage, capable of taking out the most well-protected ships, also deals immense knockback and has high recoil. It fires two lasers forward and two lasers backward from its sides that do moderate damage, however, are generally useless, except perhaps to deal with Flies. 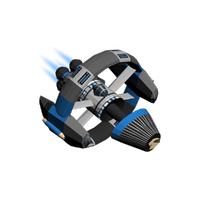 Being a Tier 7 ship, it immediately triggers the Survival period in Survival Mode upon reach, and requires no upgrades. It also has zero lives, in both Survival and Team Mode.

The Odyssey has an extremely slow speed, and nearly non-existent agility, however, it makes up for this by having sheer immense firepower, incredible shields, and exceptionally high energy regeneration. It is immediately recommended to mine through asteroids by ramming, and fill up the crystal cargo, making it far more powerful. When encountering enemy vessels, take aim carefully, predict movements and ensure it hits. Never use the side-cannons, and always wait for the main pulse to recharge. Aim shots to make the target collide with an asteroid immediately from knockback after a hit. Efficient use of the Odyssey requires every movement to be made for good reason.

The Odyssey is particularly weak against multiple small ships, such as the A-Speedster or Condor though still requiring a very long fight to be taken down. It is also weak against recoil-powered ships such as the U-Sniper, with RCS. To beat an Odyssey, it is always necessary to maintain distance enough to retreat from shots, or to navigate around using RCS. A single shot is enough to send a low-mass ship cycling through the abyss, so it is vital to not be hit, while never losing momentum and keep hitting the Odyssey.

*Energy Per Shot, in this case only considers the main pulse-shot.