Ships are the vessels piloted by each player in Starblast.io. There are currently 32 ships spread out across 7 tiers on the vanilla ship tree. New ships are constantly being created and suggested by members of the community via the subreddit. Check out the tutorial for more information on how to get started creating your own. Generally, ships in higher tiers are stronger yet slower than ships of lower tiers, with a few exceptions. Ships can be upgraded to enhance their abilities up to level 7 (level 7 ships come maxed). Each ship can also be upgraded to a ship of a higher tier, up to Tier 7, by filling their crystal cargo, from a choice of two ships.

Ships can be upgraded to one of two choices, without ever reaching the same ship twice, forming an upgrade DAG (directed acyclic graph). There are other properties, such as being able to layer the graph such that no edges skip layers (ships can be organized into the same tier, and no upgrades skip tiers). The ship upgrade graph is colloquially referred to as the misnomer ship tree, even though it is typically not an actual directed tree, as a tree is a connected graph with E edges and E+1 vertices, and there are not enough vertices (ships) for the number of edges (upgrades). A true ship tree would have no two ships that upgrade to the same ship. With one starting ship and two upgrades for every ship until the final level, it would be a perfect binary tree, which is also full, complete, and balanced. MCST (4+8+16+32+64+96 = 220) is not yet a true tree, but it is getting close (4+8+16+32+64+128 = 252). MCST without Tier 6 is an actual tree.

Another technically correct meaning of ship tree is a tree showing a player's preference for upgrading ships. Each edge in the ship graph can be assigned a weight representing how bad the previous ship is to use, and a shortest path algorithm can generate a shortest-path tree. This ship tree is the tree of all upgrade paths the player would take. As the ship graph is a DAG, there is no need to use Dijkstra's algorithm to compute it. It can be computed by doing a topological sort and visiting ships in any topological order (or just visit all of the ships in a tier before visiting ships in the next tier), determining the shortest distance and predecessor of each visited ship.

The vanilla upgrade graph is visually represented in the Ship Tree on Starblast Shipyard (it is a DAG but not a tree). The in-game ship tree (actually just a DAG but not a tree) can be accessed by hitting "Esc" (except when in a gem depot, which will exit the gem depot instead of showing the ship tree) or clicking the button marked with 3 lines in the top-right corner of the screen.

There is currently only one ship，the Fly，available at level one. The Fly is arguably the weakest ship in the game with one of the highest agility and speed levels. This will be the ship the player will start with in most game modes. This ship also has limited lives in team and invasion mode: 4 lives in team mode and 3 lives in invasion mode. If you run out of lives and you’re still a fly,game over

Tier 1 ships have only one secondaries slot.

Tier 2 currently harbors two different ships. While these two ships are much better than the fly in terms of suitability, they are still relatively weak and are often powered through to acquire a tier 3 ship. These have two secondary slots.

This tier includes what many consider as first ships that can competently and effectively be used in prolonged combat. The ships found here are the maximum tier ships available to the player in a team mode game prior to upgrading the station. These ships have 3 secondary slots.

This tier marks a large jump in fire power. The ships here become a bit more varied in terms of stats, and have 4 slots for secondaries.

This tier arguably has some of the most varied ships across any tier. It contains ships that specialize in firepower, in speed, in agility, and some in shields.

The jump from tier 5 to tier six marks another large jump in firepower, just as is the case between tiers 2 and 3. Every ship here would be considered a heavy hitter, with all but the Rock-Tower, Barracuda and the Marauder sporting a pulse. This tier also contains the largest number of ships out of any tier at 8 ships.

This tier contains the end game ships. All tier 7 ships have incredibly high amounts of firepower, which can be debilitating when attacking a ship of a lower tier and excels in destroying bases. (The X3 has great firepower, its energy generation is however very low) A skilled pilot or a group can relatively easily kill a T-7 with a lower tier ship though, due to the low maneuverability of most ships found in tier 7. This tier has 3 lives in invasion mode and 0 in the other game modes (upon death, the player goes back to level 6 in team mode, or game over in survival mode). This tier mostly consists of ships sporting a large pulse except for the Bastion. 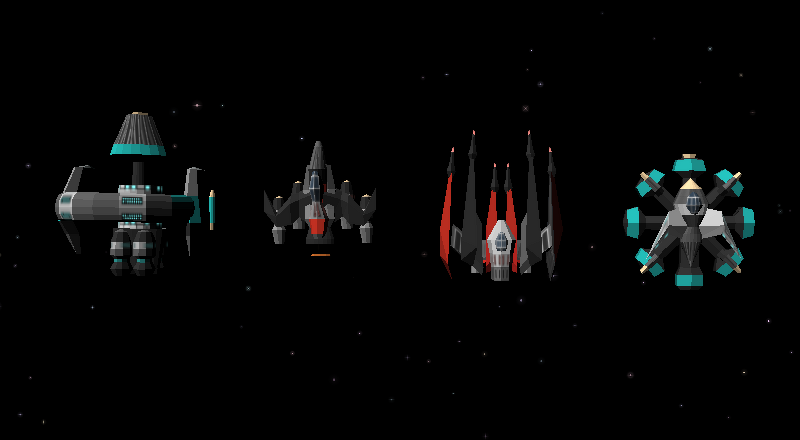 All of these ships have no energy or shield regeneration, and rely on energy and shield capsules that can be picked up at spawn points.

U-Series is a modded version of Team Mode developed by Finalizer. The U-Series is an entire ship tree based off of the Vanilla mode Tier 5 U-Sniper ship model. Each of these ships has 5 lives (except Tier 7s with 0 lives). Almost all of these ships use pulses.

These ships come with 5 lives as well except for level 7. This is the first of 2 modded ship trees by Goldman. In Alien Intrusion you attack aliens for gems instead of mining rocks.

These ships have no shield or energy regeneration. (The shield will never go down and energy is refilled by energy capsules) The Racing mod it's self was replaced with SRC but these ships are all still playable.

A entire ship tree designed by Goldman to look like various sea creatures. These ships come with 3 lives except for t7.

Kleinem Enhanced Ship Tree is a mod made by Kleinem. Instead of making a completely new ship tree, this mod adds to the vanilla tree. The ships in this mod are balanced with vanila ships.

NOTE: Kleinem Enhanced Ship Tree also includes all vanilla ships, with the exception of the H-Mercury replacing the Marauder, and the Toscain replacing the Howler. The ships listed here are not all the ships in the mod, just the new vanilla based ships.

One of three sets of ships not part of a ship tree, the other 2 being Racing and Battle Royal.

This mod is now removed due to its unstability and lacking of maintenance from the mod creator. Thus all of the ships below are not in game anymore.

(With the exception of the U-Monitor,Turtle and Lobster being in U-series and Nautic respectively)

This mod replaced the original racing mod, it has the same basic idea as the old one but improved upon.

The first 2 levels have custom modded ships, the rest are the vanilla ships including Toscain and a buffed H-mercury

Template for all ships[edit | edit source]