The U-Wall is a Tier-7 ship in the U-Series mod, upgrading from the U-Barricade and U-Monitor. It fires a wave of bullets spanning the length of the entire ship, with bullet speed gradually decreasing away form the center. It is the largest ship in the mod, as well as the second fastest Tier-7, despite its size. 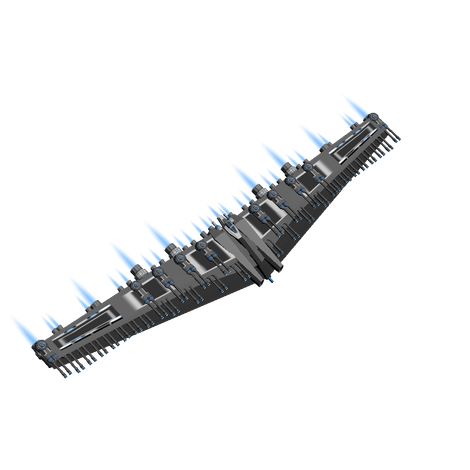 The U-Wall has the highest view distance among any other ship in the mod, allowing easy viewing of any nearby enemies and allowing successful retreats or surprise attacks. It is recommended to fire in bursts when attacking enemies to defeat them in a single shot or to make their ship lose control. While boasting a very high shield capacity as well as extreme energy regeneration and cap, its massive size and slow turning speed often make it susceptible to surprise attacks from the rear, as well as vulnerable to any speedsters in a one-on-one situation, even though the ship's hit-box does not cover the entire model.

It is highly advised that users of the U-Wall never fight alone, and instead provide fire support in groups on offense or defense. With healers, one U-Wall can block enemy fire (tanking) and mow down the enemy, while the healers keep it alive. Despite having the third-highest mass in the entire mod (behind 1200 and 900), this ship remains vulnerable to attacks from the U-Smasher, and a direct hit into an asteroid field will spell instant death without gem reserves. It is also very efficient in destroying bases, as it can cover most, if not all, of station modules with its immensely wide line of fire.

Overall, this ship is a major threat on the battlefield when used correctly in groups, and it can deal heavy damage to multiple segments of an enemy base at once. Don't get cocky, and never fly solo.

For brevity, this table is repeated 32 times but not shown.